A Look Back at BJT’s First 15 Years

BJT publishes its first issue in October. The 48-page magazine, which measures 14½ by 11 inches, features a text-heavy front cover that touts 11 stories

BJT publishes its first issue in October. The 48-page magazine, which measures 14½ by 11 inches, features a text-heavy front cover that touts 11 stories, includes the first paragraphs of three of them, and looks nothing like today’s editions. However, the masthead lists the names of several staffers who will still be on our team 15 years later; the cover sports the tagline we will still use in 2018 (“maximizing your investment in private air transport”); and the issue contains an article coauthored by Jeff Wieand, whose byline will appear in all but one of the editions we will publish over the next decade and a half.

The magazine’s cover now devotes more space to photography, and in the August/September issue, we prominently feature people there for the first time. The subjects: John Kerry, George W. Bush, and their use of Air Force One and a business jet to campaign for president.

We win our first journalism prize, a second-place award for Best Transportation/Travel Magazine in the Folio: Eddies competition. BJT begins to attract attention for its interviews with business jet travelers, including one this year with attorney Willie Gary, who recalls a childhood in which he worked dawn to dusk in farm fields under a blazing sun—and the day he first flew over those same fields in his own Boeing 737. 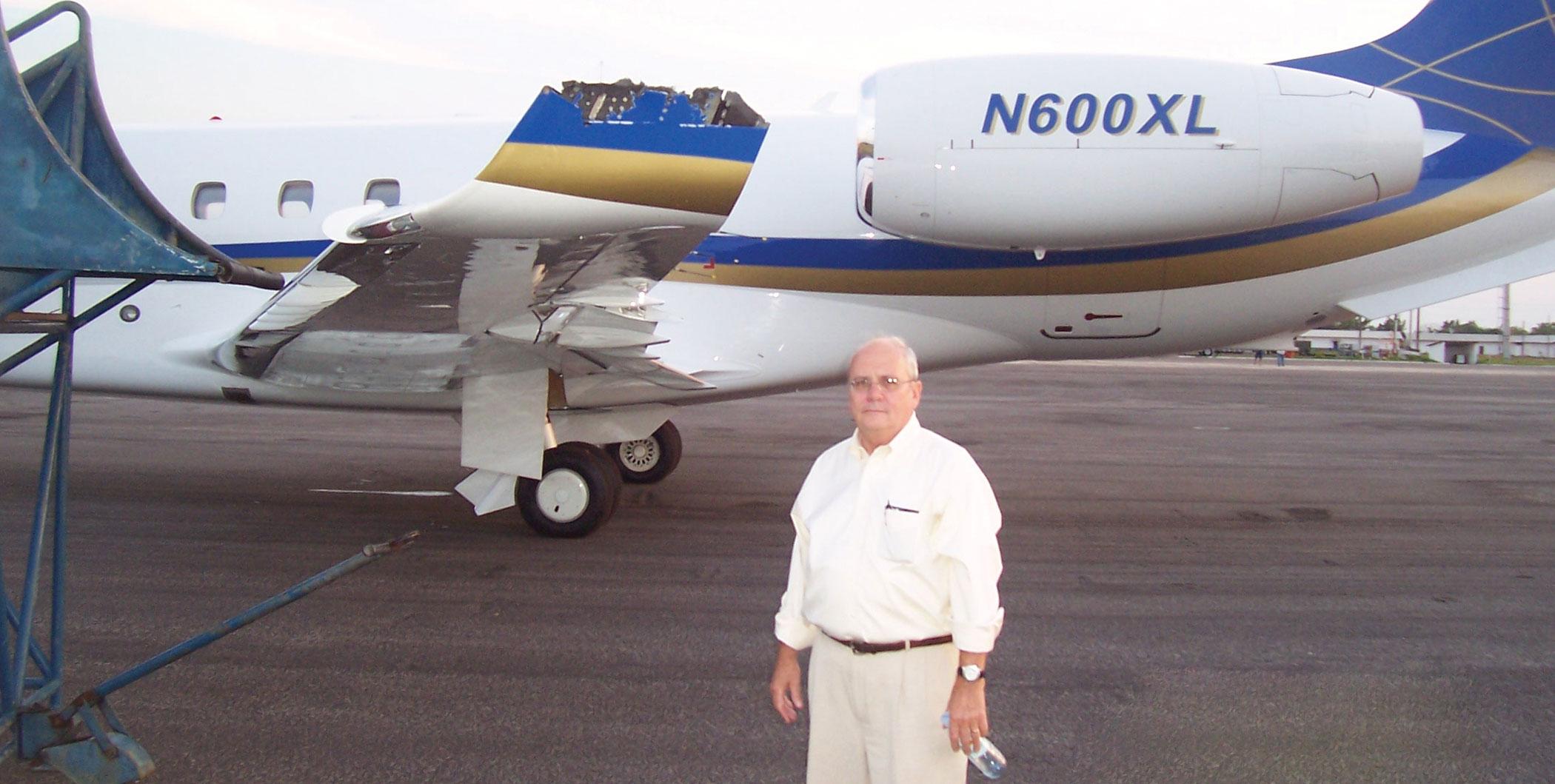 BJT’s Joe Sharkey, with the business jet that collided with a Brazilian airliner.

Writer Joe Sharkey, on assignment for our magazine, flies over Brazil in a business jet that collides in midair with a Brazilian airliner; all 154 people on the airliner die but all seven occupants of Sharkey’s jet survive. He writes about the horrific experience for a front-page New York Times story and our December/January edition. BJT debuts a slightly smaller page size and starts allotting nearly all of the front cover to a photo. 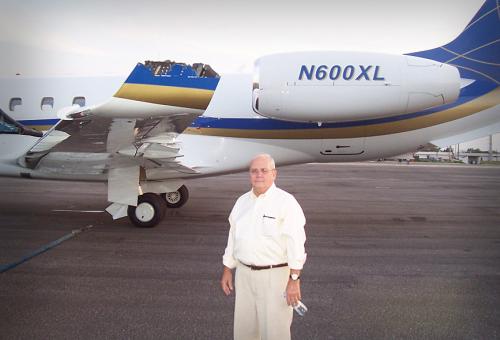 We introduce our first comprehensive redesign, reduce page size again, and begin devoting our covers entirely to photos of prominent business jet fliers who grant exclusive interviews to BJT. Among those featured is James Carville, who tells the magazine, “Once you have sipped the sweet nectar of freedom, you don’t go back [to flying commercially].” Other cover subjects include Sir Richard Branson, who recounts his first experience with private aviation, as well as former New York mayor Rudy Giuliani and businessman T. Boone Pickens. Our first annual Buyers’ Guide appears in July, and we win two awards from ASBPE. 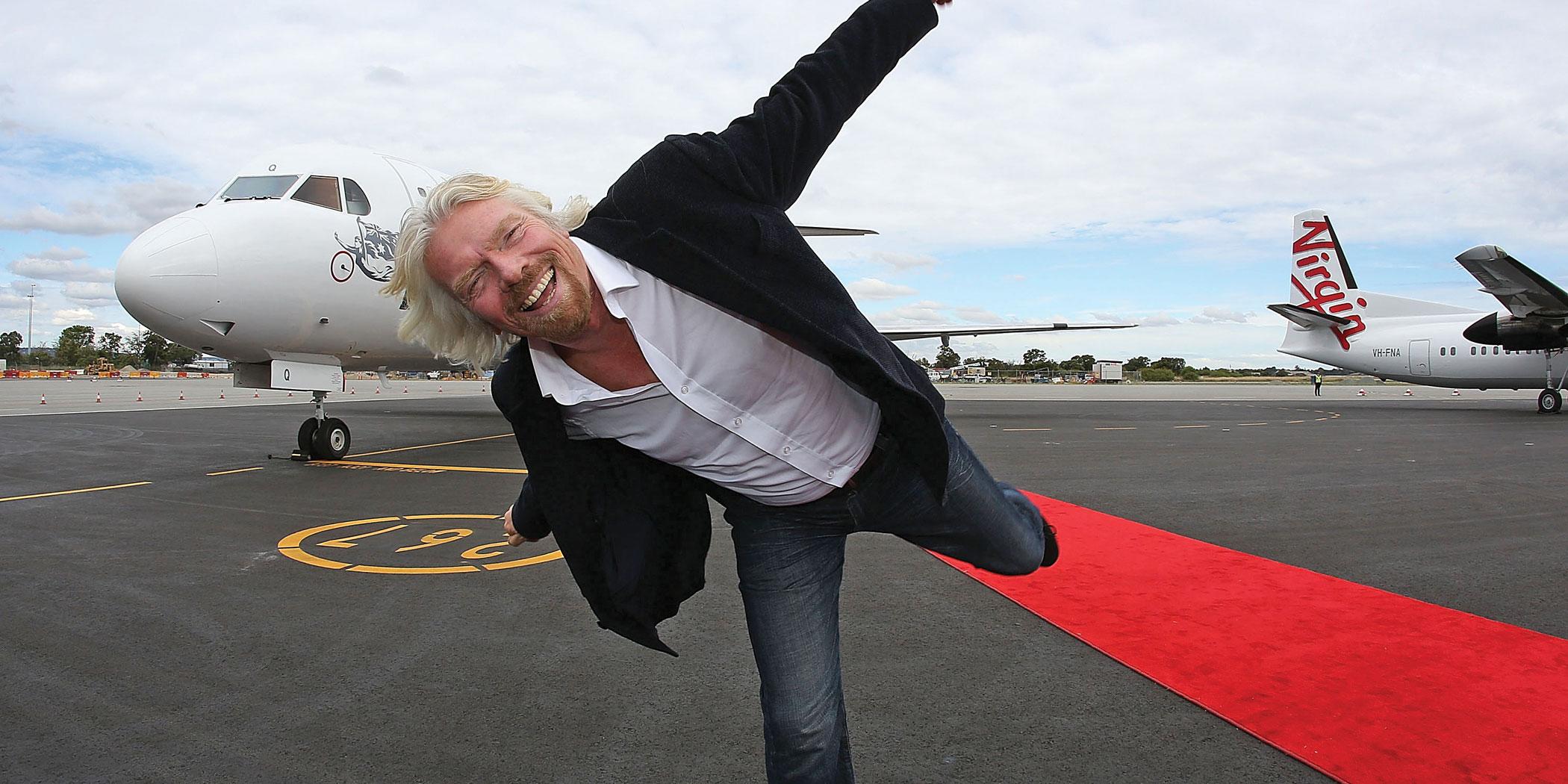 “Defending Your Jet,” a February/March cover story, addresses the controversy that ensued when three Detroit auto CEOs flew privately to Washington to ask Congress for bailouts. BJT takes home two more ASBPE awards, including one for Best Buyers’ Guide, as well as an Aerospace Journalist of the Year award and our first Gold Wing Award from the National Business Aviation Association, for the story on the automaker CEOs. F. Lee Bailey discusses the large but little-known role that business aviation has played in his life, as well as his legal work in the cases of Sam Shepard, Patty Hearst, and O.J. Simpson, whose innocence he still proclaims. Other interviewees include financial adviser Suze Orman, golf champion Gary Player, and actor Morgan Freeman.

Golf great Arnold Palmer, billionaire Mark Cuban, and jazz star Herbie Hancock are among BJT’s cover subjects in a year when we introduce more design improvements and win three awards, including ones for Best Transportation/Travel Magazine (Folio:) and Best Annual Buyers’ Guide (ASBPE). For the April/May edition, we visit Haiti to see how business aviation is aiding earthquake relief efforts; and in October/November, we publish “The Bizav Advantage,” a 10-article special section that makes the case for flying privately. 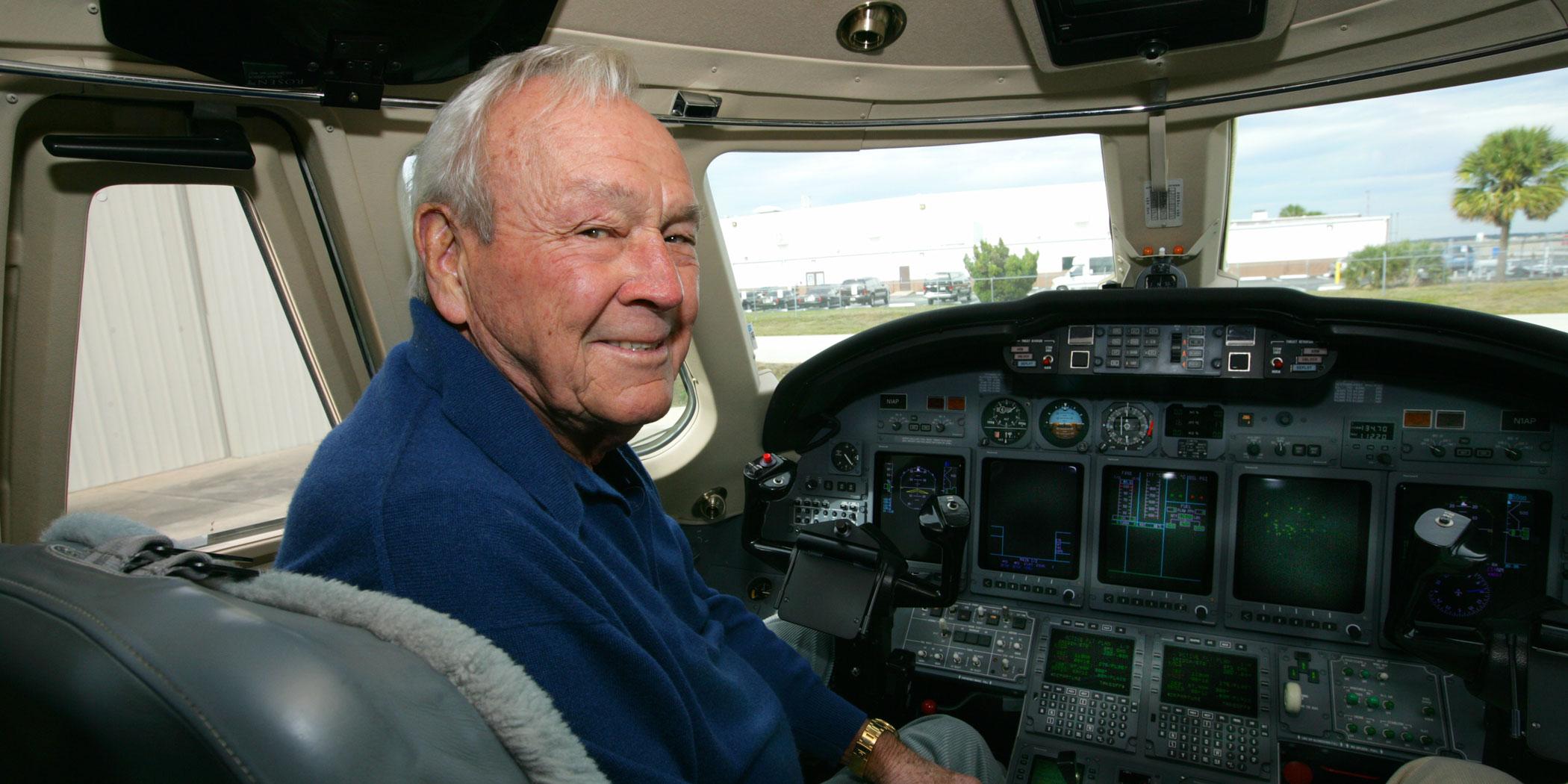 Our annual Readers’ Choice Survey debuts in a year in which we win four more editorial awards, including a national prize for general excellence from ASBPE and a Gold Wing from the NBAA for “The Bizav Advantage.” We interview Donald Trump, who tells us that he puts his name on all his buildings because “branding is a very effective business tool [but] I also enjoy the spotlight.” He hints at running for president in 2012 and says, “You will be surprised at what my announcement is.”

In our February/March edition, we offer a three-part report on the rapid growth of the business aviation field in China; then, in April, we launch our first annual China Buyers’ Guide, which we publish in Shanghai in Chinese and English. Also in 2012, we introduce our first Book of Lists, which will become one of the magazine’s most popular annual features. BJT wins three more editorial awards and prints interviews with astronaut Buzz Aldrin, actor William Shatner, and tennis star Novak Djokovic. Pop singer Lady Gaga posts a video of herself reading BJT’s Buyers’ Guide at what appears to be Otopeni Airport in Bucharest, Romania.

BJT collects two more editorial prizes from ASBPE, including another national award for general excellence. Interviewees include Shark Tank’s Daymond John, who tells us his rags-to-riches story, and Penn and Teller, who recount their first private jet flight and first magic trick. 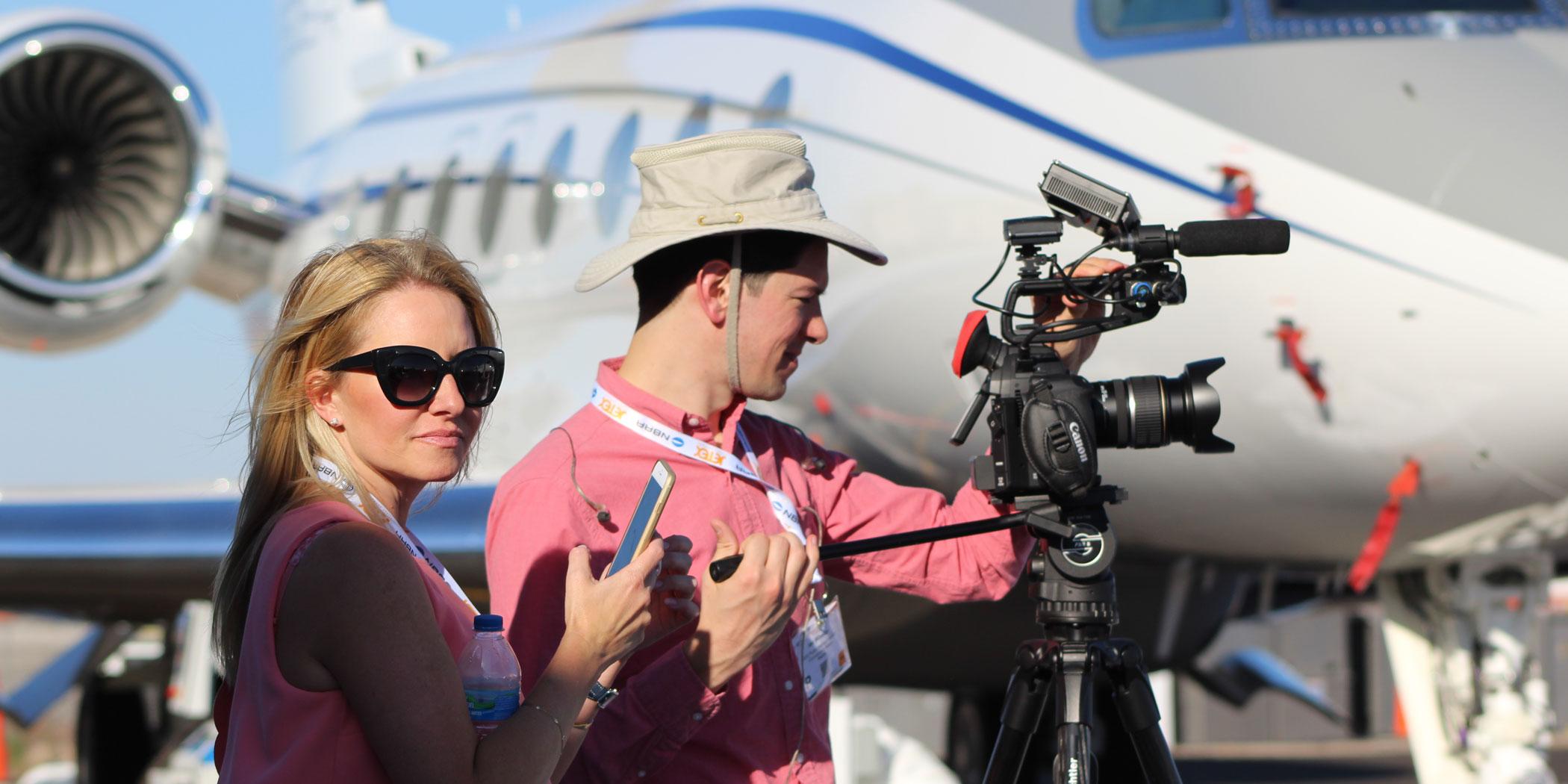 Sir Richard Branson becomes the first person to grace our cover twice, this time with a Q&A that we conducted on his Caribbean island. Other interviewees include singer and actor Harry Connick, Jr. and magician David Copperfield. BJT takes home four more editorial awards, including one from Folio: for Best Full Issue of a Travel/Transportation Consumer Magazine.

BJT begins the year by debuting its current design and page size in an issue that includes an interview with film director Francis Ford Coppola. Joe Sharkey, who wrote a weekly business feature for the New York Times for 16 years, becomes a regular columnist for BJT. The magazine wins 11 editorial awards, including three from Folio, five from ASBPE, one from the NBAA, and two from the Aerospace Media Awards.

James Carville returns to our pages, this time alongside his wife Mary Matalin, who suggests that Trump will win the upcoming presidential election. (Carville believes Clinton will prevail.) Other cover subjects include lifestyle guru Tony Robbins and Iron Maiden rock star Bruce Dickinson, who pilots his band’s bizliners. In our annual Buyers’ Guide, we introduce a Yellow Pages directory of business aviation manufacturers and service providers. The magazine wins 12 editorial prizes, including a Lifetime Achievement Award for publisher Wilson Leach and runner-up for Magazine of the Year from ASBPE. 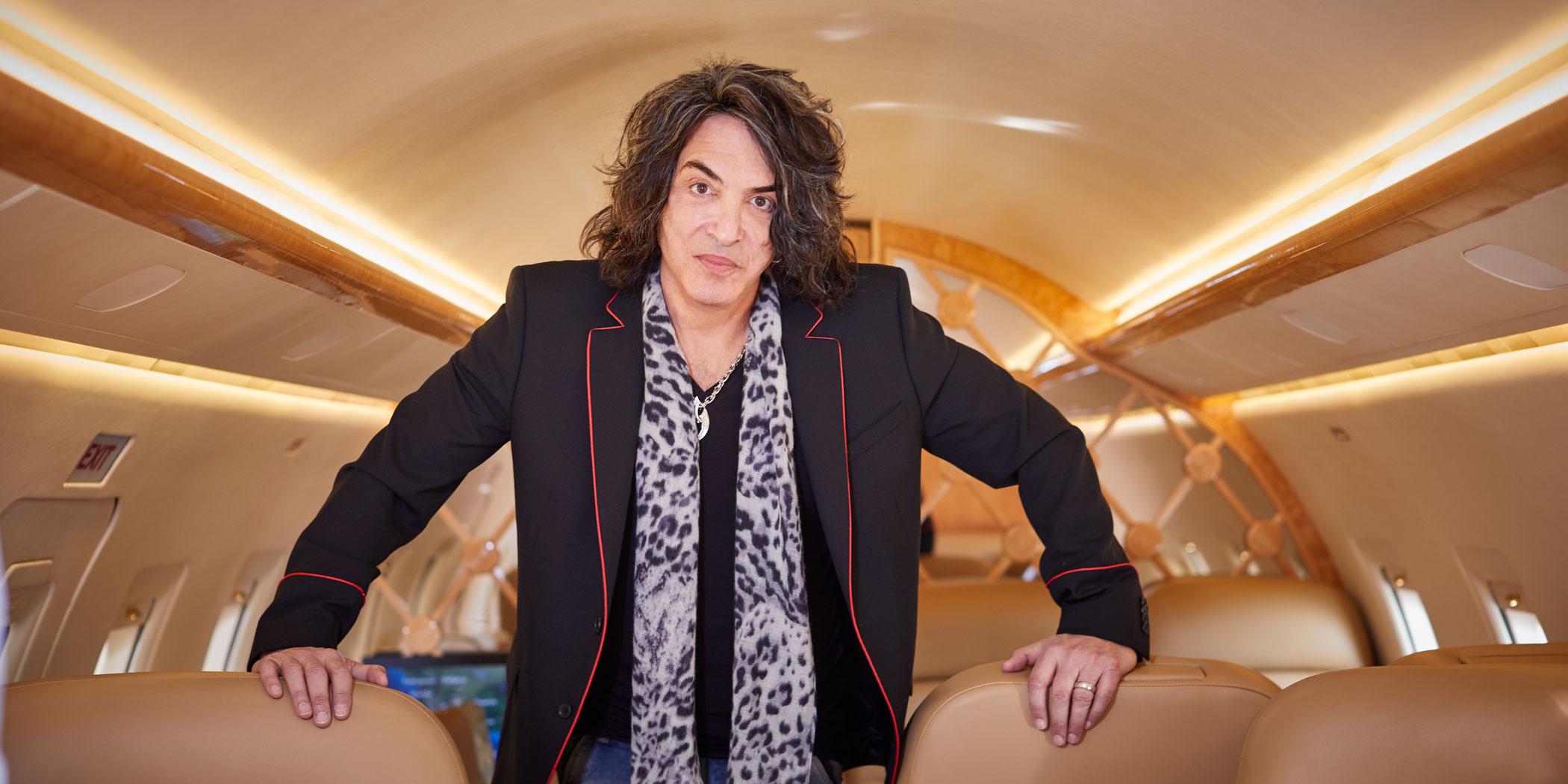 Paul Stanley, cofounder of the rock band Kiss and a 2018 interviewee

Kiss’s Paul Stanley and artist Ashley Longshore are among the cover subjects in our 15th anniversary year. By the time this issue went to press, we had won 11 editorial prizes in 2018, including a Magazine of the Year Top 10 Award for General Excellence from ASBPE, bringing the total number of awards that the magazine has won since its inception to 68. In addition, BJT had been named a finalist in the 2018 Folio: awards in three categories: Best Feature Design in a Consumer Magazine, Best Single Article in a Consumer Travel Magazine, and Best Full Issue of a Consumer Travel Magazine. Winners of these awards will be announced at a banquet in New York on October 9.