It’s stylish and fuel-efficient and holds its value well—and it could be the last in the airframer’s long line of trijets.

The large-cabin, long-range Falcon 8X could mark the end of an era. For more than 40 years, Dassault’s flagships—from the Falcon 50 to the current 8X—have had one thing in common: three engines.

What on the surface may have seemed anachronistic gave owners the ability to use short runways, especially on hot days, making these jets particularly popular with the high-net-worth set, which valued the characteristic when accessing certain bucolic destinations. One of the first times I saw a 50 up close, all 38,000 pounds of it, was when it landed right in front of me on a 3,500-foot-long runway. The Falcon touched down smartly in a puff of blue tire smoke; then I heard the simultaneous sounds of aggressive thrust-reverser application and screeching brakes as the jet came to a full stop in a mere 2,000 feet. I had never seen anything quite like it before.

Dassault followed the 50 with more trijets, including the longer and wider 900 series, which was eventually stretched, re-engined, and re-winged into the 7X and 8X—much-longer-range models that took direct aim at the large-cabin offerings from Bombardier and Gulfstream.

But Dassault’s newest large-cabin bizjets, the currently under-development 6X and 10X, have only two engines. The change was an inevitable concession to aviation tidal gravity. During the early 1980s, narrow and widebody commercial passenger trijets began falling out of favor. A new generation of high-bypass-ratio turbofan engines made an emerging generation of twinjets more reliable and economical, in terms of both fuel burn and maintenance. And a new international rule called ETOPS—“Extended-range, Twin-engine Operational Performance Standards”—made more direct transatlantic, and then transpacific, flight viable with twinjets.

But while such airline trijet “three-holer” stalwarts as the Hawker-Siddeley Trident, Boeing 727, McDonnell-Douglas DC-10, Tupolev Tu-154, and Lockheed L-1011 were preparing to make their curtain call, business jet maker Dassault turned onto a contrarian flight path, delivering the first Falcon 50 trijet in 1980. The 50 was a quick and dirty solution to the shortcomings—largely concerning range—of the twin-engine Falcon 20 of the 1960s. While the 20's airframe was robust, its noisy, gas-guzzling GE CF700 engines limited the midsize cabin airplane to incredibly short legs. Hitting a headwind from Teterboro, New Jersey, to Chicago meant a fuel stop in Ohio. Under those conditions, you could fly home faster nonstop in a King Air 200. The 50 used the 20's fuselage but had three more fuel-efficient Garrett (now Honeywell) engines and range enough to cross the Atlantic or beat a headwind and fly nonstop from White Plains, New York, to Burbank, California.

The wider and longer 900 series came along in 1986 (and remains in production today), followed by Dassault’s first foray into the large-cabin, long-range arena, the 7X, in 2007. The 7X’s 39-foot cabin is six feet longer than the 900’s and the aircraft features a longer wing with an 86-foot span that is more swept and efficient. The 7X was the first business jet to come to market with full fly-by-wire computerized flight controls. It climbs like a rocket, reaching 39,000 feet in as little as 15 minutes after takeoff, and has a fast cruise speed of Mach 0.90. With a range of nearly 5,950 nautical miles, it handles nonstop flights between such city pairs as New York and Riyadh, Saudi Arabia; Paris and Singapore; and Los Angeles and Rome.

Deliveries of the 8X began in 2016. The aircraft features a 43-inch fuselage stretch and 500 more nautical miles of range than the 7X (with eight passengers and three crew, at Mach 0.8). The extra range—courtesy of an additional center-fuselage fuel tank and a lighter, redesigned wing—enables the 8X to fly nonstop from Hong Kong to London, Paris to Singapore, and Beijing to Los Angeles. The reworked wing also keeps the 8X competitive on short runways; it needs 6,000 feet to take off fully loaded but can stop in 2,150 feet. 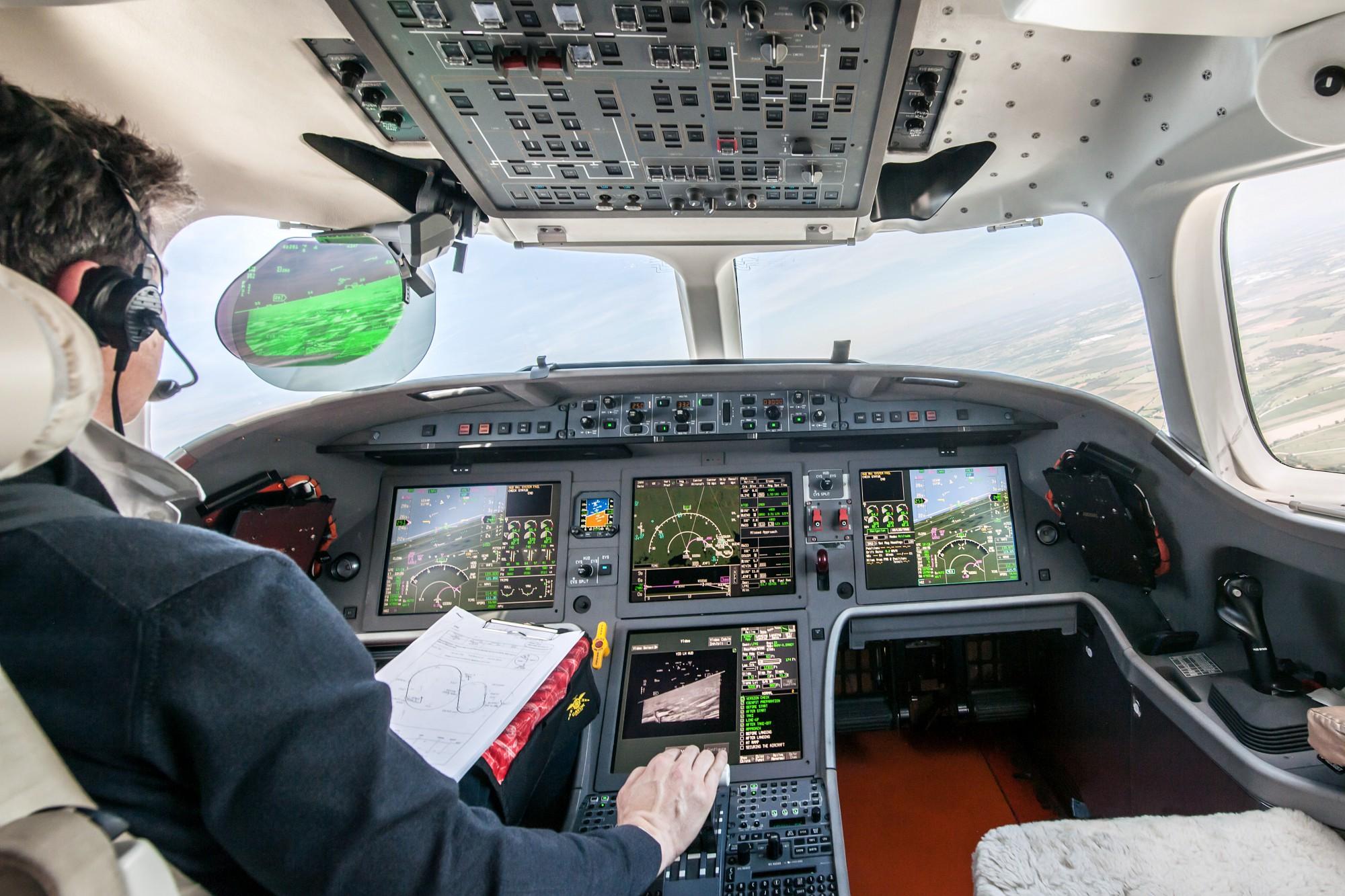 The fuselage stretch translates into 7 percent more volume—enough to allow for a somewhat longer galley, a little more legroom between seats, or an optional steam shower in the aft lav.

And you get all manner of other goodies that weren’t available or that engineers didn’t think of when the 7X hit the market back in 2007: a lower cabin altitude of 3,900 feet while cruising at 41,000 feet; a choice of more than 30 cabin layouts in three-zone configurations; four more cabin windows; a 25 percent larger galley; full-function electric seats; color-adjustable LED cabin lighting; an optional vacuum lavatory in the forward cabin; and a restyled and more comfortable cockpit with avionics built around the Honeywell Primus Epic System and the Elbit head-up display, which combines enhanced and synthetic vision. Dassault calls this combined vision system “FalconEye,” and it will enable pilots to eventually land without being able to see out the windshield.

Despite being more fuel-efficient, the 8X offers about as much real estate as competing aircraft with a cabin that is about 43 feet long, six feet tall, and nearly eight feet wide. Compared with market peers Bombardier Global 6000 and Gulfstream G550, a 2016 Falcon 8X holds its value amazingly well, according to the aircraft valuation service Vref. Through the third quarter of this year, a 2016 8X retained 74 percent of its original value, while the Global kept 51 percent and the Gulfstream 56 percent.

Those numbers are a testament to the 8X’s enduring utility, economy, and style. It may well be the last three-hole bizjet, but it is a near-perfect execution of the genre.