Signs of the times

A series of highway billboards lured our columnist to a bizarre tourist trap. Another beckoned him to call a bald attorney.

If you drive along the barren stretches on Interstate 10 between El Paso, Texas, and Tucson, Arizona, you can’t miss the roughly 250 billboards that rise up every dozen or so miles and insist you stop at The Thing? Some of these billboards call it the “Mystery of the Desert” while others inquire anxiously, “What is it?”

The Thing? Travel Center and Dairy Queen, as it is formally known, is a roadside attraction near Texas Canyon, about 40 miles east of Tucson. It’s a rest stop, souvenir shop, gas station, fireworks store, and Dairy Queen built around big corrugated metal sheds that house an eclectic—ok, let’s call it what it is: bizarre—collection of artifacts. 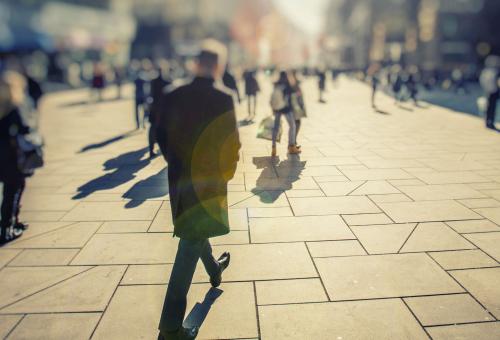 Forget taxis, buses, and subways. Our correspondent would much rather get around big cities on foot.

How bizarre? Well, a 1937 Rolls-Royce said to have been used by Winston Churchill has a mannequin of him in the back seat and a figure of an outer-space alien behind the wheel. Other exhibits, arranged around baffling themes, feature other aliens interacting with dinosaurs. The main attraction is a big glass case housing The Thing?, which (spoiler alert here) appears to be the mummified remains of an adult and child but which has been debunked as the work of Homer Tate, an entrepreneur known for using paper, mud, and animal bones to craft faux mummies, mermaids, and other macabre figures. Tate, who died in 1975, sold the figures to sideshows and roadside attractions. The Thing? is said to be his masterwork.

I would not have known any of this, or felt an urge to pass it on, were I not an inveterate reader of billboards. The ones hawking The Thing? on I-10—with words in the kind of garish, shaky font once familiar on horror-movie posters—bombarded me on a recent drive home from Santa Fe. So I turned off at Exit 322, filled up on gas, paid my $5, and wandered wide-eyed through the clamoring kitsch to the lure of The Thing? Hey, I’ve spent five bucks in more ridiculous ways.

While I can’t resist the urge to read roadside advertising, I support the efforts of the nonprofit organization Scenic America to combat “billboard blight.” More than 700 municipalities in the U.S. have adopted laws prohibiting construction of new billboards, but they have been hard to ignore since the dawn of the automobile age, and the revenues they generate are significant. Advertisers spent $4.97 billion on them last year, according to the Outdoor Advertising Association of America, and the figure has been rising steadily.

The billboard barrage is never more insistent, it seems to me, than when you’re driving into an urban area and are suddenly surrounded by signs touting personal-injury, divorce, and other lawyers. “Call 855-CAR-HIT-U,” one attorney’s billboard yelps into the streaming traffic. Another, with a photo of  a female personal-injury lawyer, asks, “EVER TRY ARGUING WITH A WOMAN?” And consider this one, by a criminal-defense law firm in North Carolina: “JUST BECAUSE YOU DID IT DOESN’T MEAN YOU’RE GUILTY.” Or this one, near Atlanta, which features a bald man in an expensive suit: “INJURED? DONT PULL YOUR HAIR OUT! MYBALDLAWYER.COM.”

That last one made me think of the Burma-Shave highway campaign that lasted from 1925 till 1963, advertising what in its early years was an innovative concept: a brushless shaving cream. The oblong signs were arranged roadside all over the country with lines of jingles displayed on posts in succession about 25 yards apart. There were hundreds of Burma-Shave jingles, as Frank Rowsome Jr. notes in his 1965 book, The Verse By the Side of the Road. Here are two: