The World's Best FBOs, According To Travelers

Insider insight into outstanding ground-service operations in the Americas and beyond.

FBOs (short for fixed-base operations) play a vital role in business aviation. At airports worldwide, they offer parking areas, hangar space, towing, and fuel for private aircraft. In addition, they provide amenities and assistance for passengers, including comfortable lobbies, refreshment bars, conference rooms, and customer-service agents. For pilots, there are lounges, snooze rooms, flight-planning areas, and crew cars. Some FBOs even cover greens fees at golf courses for crewmembers who are awaiting the return of their passengers.

To determine which of those locations offer the best overall experiences, BJT’s sister publication Aviation International News (AIN) has conducted an annual FBO survey since 1981, polling a select subset of its readership, including pilots, flight schedulers, and dispatchers—those who can evaluate the operations most knowledgeably. These individuals have access to a website that allows them to rate FBOs at any time during the year. That allows them to keep their observations up to date, with their latest rating of a location replacing their previous one.

AIN annually publishes lists of the top-ranked FBOs in the Americas and the rest of the world based on cumulative average scores for the previous five years.

Respondents to the AIN survey are asked to rate facilities on a scale of 1 to 5 in the following categories:

Line service: competence and professionalism of the workers who meet the airplane on the ramp and service it.

Facilities: cleanliness, comfort, upkeep, and convenience of the location.

Customer service: professionalism of customer-service desk representatives, their familiarity with the local area, and their assistance with hotel reservations and catering arrangements.

The survey responses demonstrate that it is not enough to excel in only one of these areas. To be a top-ranked FBO, facilities and their staff must be great across the board. 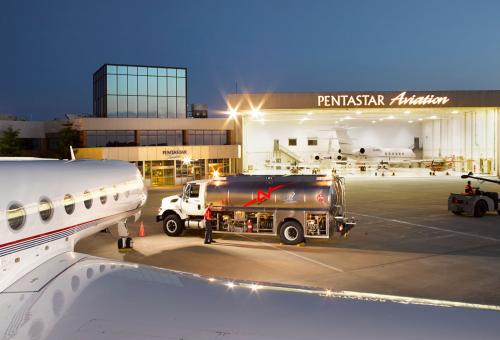 While it has occupied its permanent facility for less than five years, American Aero FTW has made its name known in the Fort Worth area, scoring in the top 5 percent in the AIN FBO Survey each year since 2017 and earning last year’s highest overall score.

Since its beginning in 2012, safety has been the cornerstone of the company, which was the world’s first FBO to achieve Stage 1 and Stage 3 registration under the International Standard for Business Aviation Handling.

American Aero FTW is also well versed in customer service, with its staff undergoing Ritz-Carlton training. That focus earned the location its highest score this year in the customer-service category (4.86).

Pentastar Aviation, which has been in business for nearly six decades, started as the flight department for Chrysler Corporation. It eventually extended its services to other jet operators, and two decades ago it was purchased by Edsel B. Ford II, great-grandson of the legendary Henry Ford. Now a full-service FBO, the company has 229 employees and offers everything from aircraft management and charter to interior refurbishments and 24-hour maintenance. It even has its own kitchen, Fivestar Gourmet, which supplies catering to aircraft operators as well as meals to airport workers and customers.

Pentastar’s sprawling 22-acre complex includes 130,000 square feet of hangar space, which shelters 21 aircraft ranging from an Eclipse to a Boeing BBJ, and 10 acres of reinforced ramp space. A pair of terminals with the main 5,000-square-foot building offer passenger lounges, multimedia-equipped conference rooms, and a café. The 10,000-square-foot two-story satellite Stargate terminal is equipped to handle large charter flights such as sports teams, with its own jet bridge, baggage carousel, and departure lounge.

The Avfuel location—which also serves as a DCA Approved Gateway for flights into Washington Reagan National Airport under the DASSP Program—has achieved IS-BAH Stage I registration and is certified under NATA’s Safety 1st Clean Program for Covid mitigation.

Rounding out the top three slots in the Americas are Sheltair at Tampa International (4.75) and Henriksen Jet Center at privately owned Austin Executive Airport (4.74).

The UK’s Farnborough Airport continued its more-than-decade-long reign as the highest-ranked FBO outside the Americas. While ground-support operations outside North America tend to lag in terms of scores, Farnborough’s overall rating is high enough that the FBO, which our readers ranked second highest in the world this year in the facilities category (4.85), would place in the top 10 percent even among North American service providers.

Farnborough, which features 260,000 square feet of hangar space and an on-airport luxury hotel, is the first purpose-built business aviation airport to be certified as carbon-neutral.